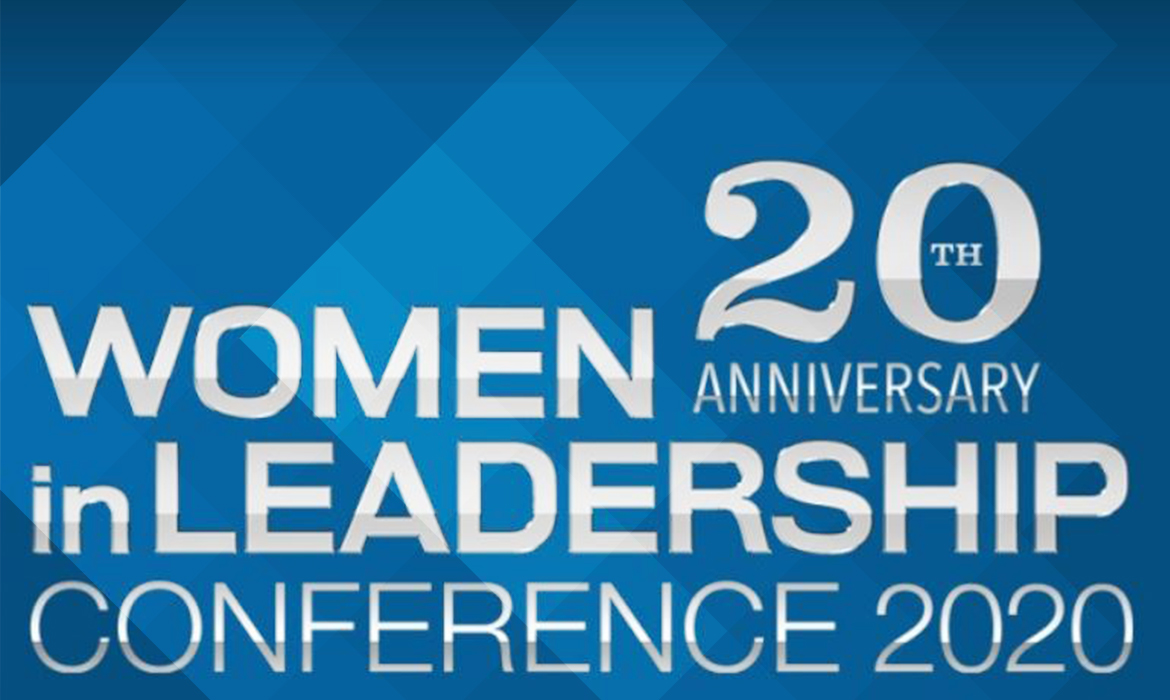 What We Learned at the Women in Leadership Conference

In February, we attended the Women in Leadership Conference. It was a special day as this was the 20th anniversary and Valentine’s Day. Not only did ladies (and men) show up in festive red and pink, but everyone showed up with love and appreciation of what this event has meant over the past 20 years. The Women in Leadership Conference is a day-long event put on by Rice University Jones Graduate School of Business that celebrates and empowers women to accomplish their career goals. It includes an opening and closing keynote speaker, panels and interactive workshops – one which was led by our very own, Delfina Govia. Natalie Marshall, Diayane Aguirre and Joel Powell were in attendance. Here’s a recap of the panels and workshops that we were able to attend…

Of course, at the top of our list is the “How to Live 300 Years” Workshop led by our fearless leader, Delfina Govia. This workshop was an abbreviated version of Delfina's full-day workshop that helps you self-reflect on the connections of the highest and lowest points in your life. You then apply this to an equation that forces you to evaluate where you are prioritizing your time and if this lines up with your desired happiness state. The life you wish to lead and the life you are leading are not always the same. Delfina goes deeper to see how you can correct this and ultimately, lead a life that maximizes your fulfillment. Her workshop is a must-attend event! Delfina will be hosting a FREE workshop on Friday, March 27th. Click here to register. 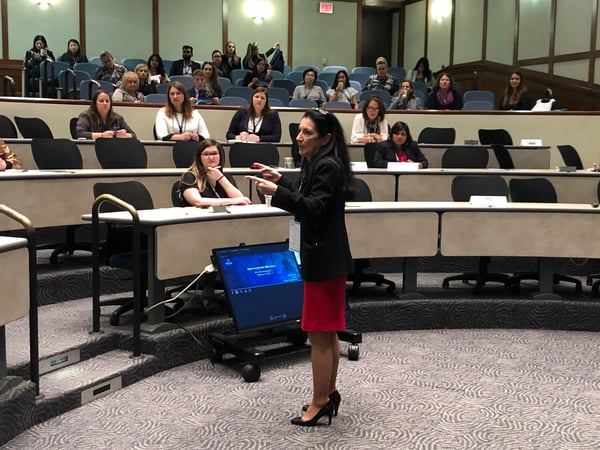 Ann Fox, CEO of Nine Energy Services opened the conference and Sandy Acsh author of ROAR: How to Build a Resilient Organization the World Famous San Diego Zoo closed out the conference. Both had inspiring messages and coincidentally, both were about persistence and resilience.

Ann attributed her resilience to her father and military background. She spoke of numerous times in her life where she had to push through and ask for what she wanted, even when that meant putting herself in uncomfortable positions and making sacrifices to do so. Her symbolic example of “bending vs. breaking the branch” was a great way to convey her message of being resilient, but also knowing when to hammer through and when to show more patience.

Sandy, on the other hand, developed an appreciation for resilience by watching lionesses when she was younger on family safaris. She said was fascinated by their innate ability to stay calm and not give up in their hunting efforts, despite that they fail 70% of the time. Sandy went on to apply her love of resilience and lionesses by helping the San Diego Zoo build a purposeful, thriving culture and organization. Sandy states that the 4 elements that are key in resilient cultures include: purpose, transparency, the ability to respond and not react (remaining calm) and the ability to embrace fears and failures (being courageous). 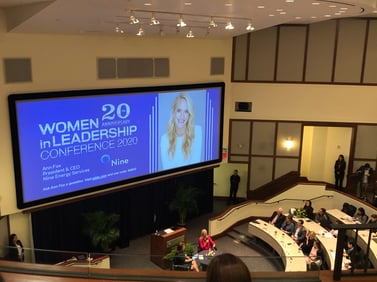 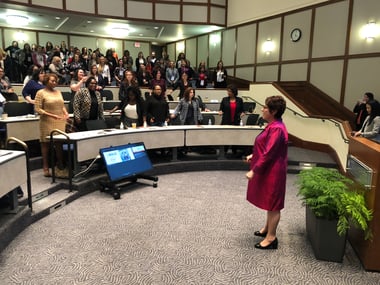 Natalie Marshall attended this panel that included Jaime Hickman, (U.S. Army), Muneezeh Kabir, (Workforce Strategy), Scott Livingston (NOV), Matt Lyle (Shell) and moderator Mikki Hebl (Rice University). This panel was focused on the importance of women having male and diverse mentors. The panelists opened by saying there is a clear distinction between being a mentor, a sponsor and an ally. A mentor is big picture and long term, a sponsor is time/project-based and an ally is based on mutual understanding.

With this in mind, it was noted that a mentorship can come in many different forms, it can be formal or informal and you can (and should) have a variety of mentors. They also noted that it’s the people with tenure (the mentor) that benefit just as much, if not more, than the mentee considering our new work environment. Since older generations grew up in a more rigid, hierarchical organization where collaboration wasn’t as much of a necessity as it is now, mentees can help educate mentors on how to be inclusive and adapt to the new styles of working. With mentorships, the benefit for both is less about new skills and more about having a new introspective. To this point, they noted the “people managers”, or the more functional roles versus technical roles, are often the best mentors to seek out.

Outside of the more formal mentorship relationship, the panelists spoke about the importance of collaboration and diversity in groups and how all team members can all help ensure everyone is included and heard. For example, creating committees that allow outlets for different groups to connect and share, making sure everyone is asked to speak up at the end of a meeting in case they didn’t have an opportunity to say anything earlier and having women at recruiting events to physically show that the company values and hires women are all ways of promoting connecting and sharing. Another way men can help in an informal setting is to speak up for women, especially for gender-related conversations. The moderator spoke of the “peanut effect” where a woman giving a gender-related speech may be devalued whereas if her male ally gave it or reinforced it, it may be more impactful. The conversation wasn’t only about men and women as allies, it also touched on women supporting women and the false narrative that women don’t help other women. The takeaway was that women want to have two things: to be liked and to be respected. If it is impossible to have both, it was advised to seek to be respected over being liked. 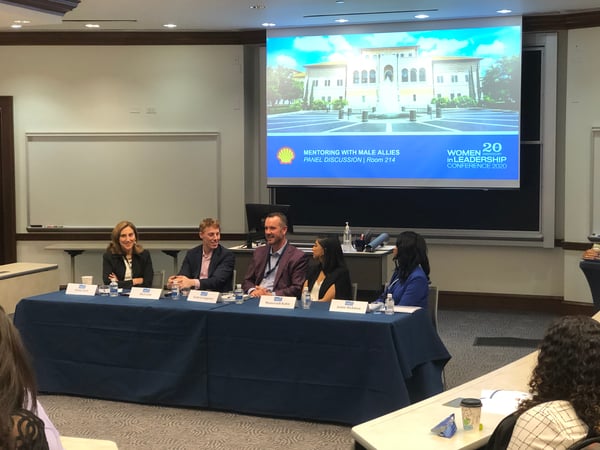 The Frontier of Diversity & Inclusion in Business Panel

Diayane Aguirre, Natalie Marshall and Delfina Govia attended this panel. The panel included Deborah Byers (Ernst & Young), Janelle Daniel (Transocean), Amy Dalton (BCD Travel), Larry Perkins (MD Anderson) and moderator Jessica Aberle (Helix). The panel focuses on the changing landscape and how policies have evolved to support an inclusive workplace. There was a wide variety of topics discussed so I’m going to boil it down to a list of rememberable ideas that were discussed…

There were many great panels – these are just a few of the ones we were able to attend. As you can see, there were a variety of topics discussed. This is a wonderful event that has been going on for 20 years. The speakers were engaging and enlightening. We highly recommend attending in the future. It’s a great way to hear how women are making a difference and how they are overcoming current challenges in the work environment. If you have any questions about the conference or the topics discussed, please let us know.

At Veritas, we encourage collaboration, female inclusion and diversity. Our workforce is approximately 40% female, higher than the industry average of 25%, with employees having backgrounds from multiple nationalities. Our differences fuel our innovative way of thinking. For more information on our strategy and transformation consulting services, contact info@veritasts.com.

Natalie Marshall, Marketing Manager at Veritas Total Solutions, brings over a decade of advertising and marketing experience. She has a versed background serving in various strategy and account management roles at media, digital, print and experiential advertising agencies. Natalie is responsible for leading all Veritas marketing efforts including networking, content creation, alliance and partner relations and brand management and promotion.