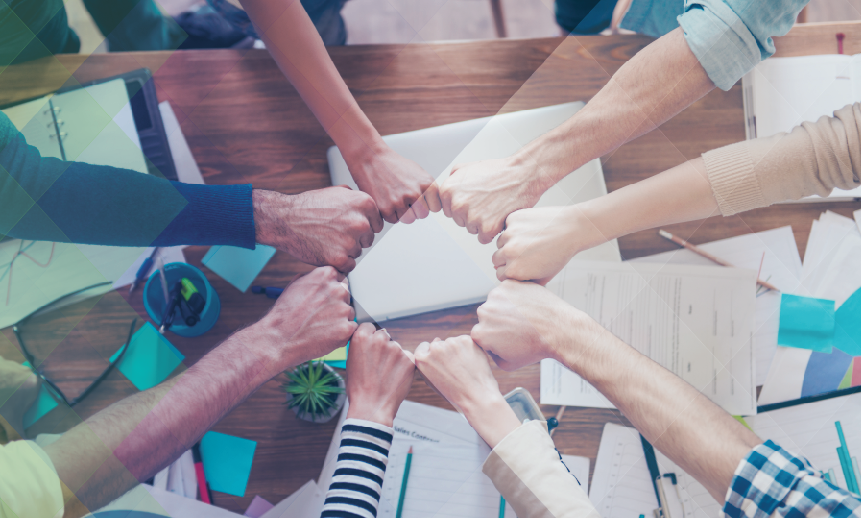 Trust: The Necessary Ingredient in Building a Productive Team

Creating a successful and high performing team can be a challenge. Dr. Bruce Tuckman synthesized team development into four basic stages including forming, storming, norming and performing. The storming phase can sometimes be the most challenging because this is when the honeymoon is over and conflict arises. As a firm that helps create effective project teams, we are often asked how a team can avoid spending precious time in the storming phase.

It should be obvious that the higher the percentage of effort that goes to solving the problem, the higher the return on investment. However, this is only true if the effort is going into implementing and communicating. If your effort is focused on self-defense, then you risk lowering your return on investment. Interestingly enough, self-defense typically surfaces in the storming phase when the initial excitement is over and the work begins.

So, if self-defense in the storming phase can be so damaging to the productivity of a project and ultimately the bottom line, how do we avoid it altogether?  Our experience has shown us that building trust within the team is the answer. And here’s how.

1. Recognize the importance of trust.

A lot of department leaders and managers do not realize how much effort their teams actually spend in self-defense. Self-defense comes naturally to most of us which makes it hard to recognize. In an environment that we subconsciously perceive to be risky, we automatically adjust our behavior, usually to a much greater degree than we are consciously aware of. On the flip side, if you have been lucky enough to work on a team where mutual trust is high, you already know from experience that a team that trusts each other simply drops the blame-aversion effort entirely and accomplishes so much more. Before you can find and recruit people you trust, it’s important to recognize the value that trust can bring to a team.

2. Find people you trust through failure.

Trust, you see, is all about the confidence that when a failure happens on your team, the people responsible will step up and say, of their own free will, “This one is on me;” and also that the other team members will accept the accountability and move forward in solution mode rather than blame mode. Once you have seen a team member fail, you know whether that team member is the kind of person who steps up, or the kind of person who tries to pass the buck. Once you have seen a team member react to someone else's failure, you know whether that team member is a blamer or a solver. Until a failure has happened, you are simply guessing. Thus, ironically, a team that experiences at least some failure can subsequently experience a sharp jump in productivity – if the failure is handled properly by everyone on the team. Your failures are actually critical opportunities: they give you the chance to prove that you can be trusted. And the first time your team members let you down, is also an opportunity: you are about to find out whether they can be trusted, and you are about to show them whether you prefer to blame or to solve. There are very few things that are more important to know about a colleague than their reaction to failure, and few characteristics that impact productivity more. You can’t know for sure that you can trust people, until you see them fail.

Promoting trust within the team typically falls on the shoulders of the project lead. The project lead gets the desired responsibility of highlighting individuals that are performing well. However, it’s equally important for them to recognize – and take action against – team members that are not performing well within the team and/or living up to the group culture standards. Removing a member that is not a good fit for the overall team sends a message: The team culture is more important than the individual. This builds respect for the project manager and builds trust and a great working culture within the team. It’s helpful for the project manager to enforce certain behaviors if he/she has a company Culture code to reference and promote. Check out The Rise of the Culture Code to learn about the importance of a Culture Code and how to create one, if your company doesn’t have one in place already.

4. Recruit people that you know and trust.

Trust is one of the reasons that you often find the same people working together over and over, following each other from company to company. Once you have worked on a trust-driven project, you recognize the value of trust – and you realize how much damage is done to the effectiveness of a team if you simply introduce a single person whom it is not safe to trust. Trust-valuers, then, accumulate a list of colleagues whom they have learned they can safely trust. When a new project is starting, it is far more efficient to recruit into the team someone with whom you already have a trust relationship, than it is to start from scratch building up trust with new acquaintances.  We have in the past hired teams who have already done the job in another project – teams who have already been battle-tested.

Creating a team built on trust can be a long and sometimes painful process. Hostile and risky environments create a team that spends more time in self-preservation and making sure that the blame doesn’t fall on them. Trust enables people to concentrate on building solutions and reaching breakthroughs. Trust also encourages creative thinking - the type of thinking that really empowers teams to create leap frog solutions.

You might be expanding your team, building a new team from scratch or stuck in a rut and need to reevaluate your team. Whatever your situation is, it’s important to keep trust at the forefront of your decisions since trust, especially when it’s already established, can be the key to your team’s success.

At Veritas Total Solutions, we offer a range of strategy & transformation services through a team of trust-worthy members that you can count on. Our team is the difference and as a service firm, we value trust and building trusted teams more than anyone. With some of the leading experts in the industry on staff, we leverage our networks to continually grow and add to our teams. Our teams have years of experience working together. Take advantage of our already formed teams with proven track records by augmenting your team at an individual or group level. Don’t take on the burden and risk of forming a team when you don’t have to. If you are interested in a Veritas team serving your needs, contact us to learn more or subscribe to our blog to stay connected!

Kenny is one of those rare individuals with deep functional and technical capabilities. He has broad commercial experience spanning the front, middle and back offices, quantitative expertise in risk and options analysis, and design and development skills in numerous analytic and programming languages.