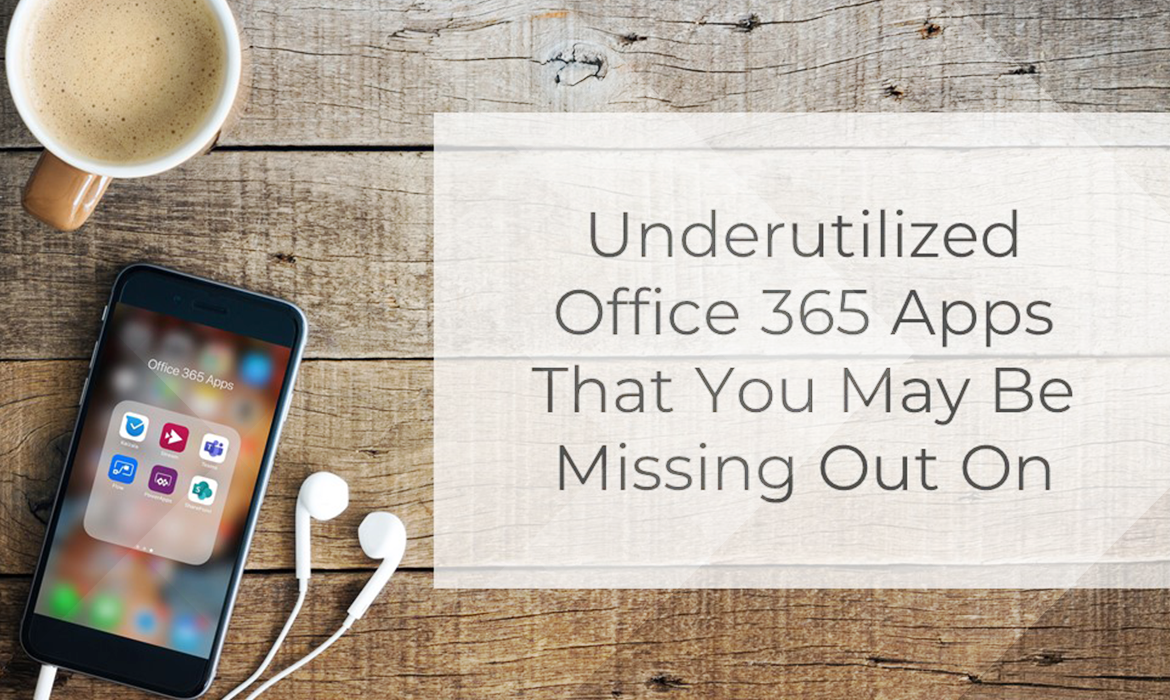 Underutilized Office 365 Apps That You May Be Missing Out On

Let’s start with a hypothetical, but fun, situation. You are on the Steve Harvey show and he asks you the following question in the final jackpot rapid fire round.

Question: Name 5 apps that you use in Microsoft Office 365.

You have 15 seconds to answer.

If your answer included the following apps, you would have been awarded the highest possible points and won the big prize money!

Office 365 wants to offer you and your company the most value by providing you with multiple, powerful apps that will enable the company to be more productive, have better collaboration and make efficient use of an employee’s time. In this blog, we will declutter the 6 most underutilized Office 365 apps and show you how these apps can improve efficiencies within a team and/or for a single user.

Welcome to the business version of WhatsApp…

Like WhatsApp, Kaizala is a chat app that is essentially free. According to Microsoft, “Kaizala is a phone-number based, simple, and secure mobile chat app that enables you to connect and coordinate work across your network — your organization, vendors, partners, suppliers, and customers.”

There are a lot of beneficial features with Kaizala, including:

Kaizala is available for free as part of the Office 365 package.

Stream is an app that can keep all the video content of your company in one place. Think of it as an enhanced version of YouTube. It is considered enhanced since it comes with some cool features in addition to uploading videos and creating channels.

Some benefits of Stream include:

Stream is available for free as part of the Office 365 package.

One of the apps which is becoming popular across large organizations with a very fast user adoption rate is Teams. Teams is considered your one-stop-shop for collaboration. You can integrate most of the apps in Office 365 into one single app.

Consider a common workplace situation: An employee needs to communicate with another employee about a document. Both need to work on it together and engage the whole team when the work is done. The whole team needs to record the changes from the meeting so that it can be referred to in the future. This process involves using the following apps but separately.

The users need to access different Office 365 apps at different points for collaboration which can get a little cumbersome. Teams is built to minimize the need for multiple collaboration tools. With Teams, you can integrate all of the apps into one place and users can directly access, track and complete tasks in one place. Teams also allows several third-party services that can be integrated into Teams for seamless collaboration and work effectively.

To recap, some benefits of Teams includes:

PowerApps is the app store of Office 365. It is compatible with web and mobile. You can build, configure and integrate apps that are custom built for your organization. From simple surveys to complex inventory management, PowerApps can greatly increase ROI, reduce development effort and increase business process efficiency.

The below stats are provided by Forrester Total Economic Impact which show how businesses are affected when using PowerApps:

PowerApps are low-developer code-based apps but also extend the availability for a complex development environment. What this means is, the apps can be built by power users as well as developers. This platform provides hundreds of templates from which the functionality can be easily configured according to your company’s business needs. Also, PowerApps can be integrated with other Office 365 products like SharePoint, Teams and Power BI.

If your organization has an on-prem SharePoint environment, you might have heard the term, “SharePoint Designer”. SharePoint Designer was a tool offered by Microsoft that was used by power users and developers to automate the workflows and configure features available OOTB (Out-of-the-Box).

Flow is a similar tool but much more powerful and advanced. The big benefit? In Office 365, Flow is not restricted to SharePoint. It is an app that can automate the workflows whether they are built in SharePoint, PowerApps, Teams or any other Office 365 app which hosts can host a workflow. Here is a list of some benefits with Flow:

6. SharePoint (with a new twist)

Yes, this is not a misprint. SharePoint is not considered underutilized and it is not a new app by any means. So why mention it?

Have you ever heard of the sentence “anything but SharePoint”?! If you have, you have probably been around people and/or organizations that have not had a positive experience with SharePoint. Let’s look at some of the challenges with Classic SharePoint and how Microsoft is solving for those.

Microsoft is working on ways to solve these problems. SharePoint has gone through a recent refresh and has a new look both in terms of architecture and UI. Team Sites, Communication and Hub Sites were introduced in late 2016. These three together are now called “Modern Sites”. Benefits of Modern Sites:

In general, Modern Sites offers a lot of new features that significantly reduce the development effort to make a “cool” looking UI but also make it easier for the organizations to reorganize the LOBs in the SharePoint hierarchy. Modern Sites also align with the new apps and integrations that are already featured and are in the pipeline

Being aware that these Office 365 apps exist is only step 1. Using and taking advantage of these apps can help reduce costs and increase productivity. These apps can be seamlessly integrated which can greatly improve the productivity of your organization. One of the greatest advantages of using these apps is that they are updated almost every month with no extra cost but with enhanced feature sets and bug fixes.

Please note, Office 365 has a host of other apps that are available within the same license. They were not mentioned in this article because they are more universally adopted and not considered underutilized. The most commonly used apps include Office, Outlook and Skype.

At Veritas Total Solutions, we help organizations get the most value out of their digital tools including collaboration tools like Microsoft Office 365. We can help design, implement and/or manage services related to Office 365 products and a variety of other technology solutions. If you are interested in learning more about our specific capabilities, contact us or subscribe to our blog to stay connected.

Sandeep Chinta, Manager, has a decade of management consulting experience primarily focused on Information Technology earning a successful track record of implementation, maintenance and support of web-based solutions. He is effective in leading teams through challenging technical environments, proficient in understanding complex technical systems and capable of delivering quality solutions on-time and under-budget. He is also great at sharing his deep knowledge of IT best practices, systems and tools!