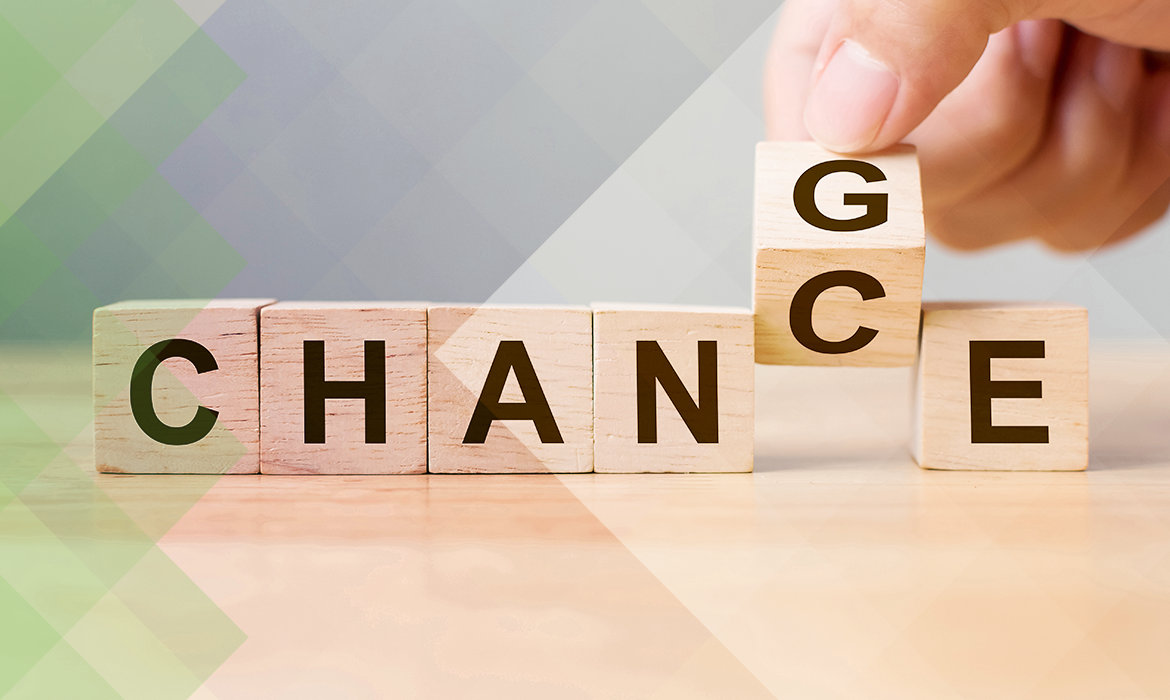 Scientific evidence proves that people do not like change. The reaction to change ranges from physical to psychological. It truly stresses people out. Change disrupts methods and ways that people are used to and forces them out of their comfort zones. It introduces the unknown into their lives. It is unsettling. At work, team members would rather continue performing tedious processes than go through change.

However, change is inevitable. Change is necessary for companies to evolve, thrive and continue to be successful. Delivering a successful project is nothing if the users and stakeholders resist the change.

Remember that people are not thinking about the project nearly as often and as deeply as the project manager – especially the users who are still doing their existing jobs. People may have an adverse reaction initially, but this is a normal human reaction. Talk about the change early and often to help people adjust to the new normal as quickly as possible.

Individuals follow a pattern on how the respond to change over time, as shown on the chart below. Initially there is shock and denial. At this point, it’s important to create alignment and set forth a clear plan. Frustration will set in as they think about it more and don’t see the progress made. While the end users may not be able to see the progress made, it’s very important to communicate regularly to make sure they their fears are addressed. Eventually, individuals will fall into a valley of despair as time goes on and they still don’t have produced results. Just keep communicating and stay motivated and positive. As produced results become tangible and real, stakeholders and users will be able to experiment and get excited about the new changes eventually leading to acceptance and can even become advocates of the change.

Also, find communication channels to remind and train people of the change that is coming. Don’t rely on one channel. Using different communication channels ensures that the team sees it and reinforces the messages that change is coming in different ways. Newsletters, emails, training sessions, brown bag sessions – all of these can be used in a systematic way to make change easier. 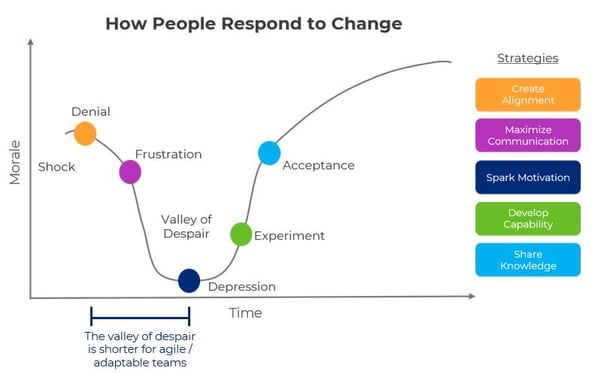 Show Them vs. Tell Them

Communicating change throughout the project is important, but it’s even more impactful the users are able to see and touch the new system to minimize the shock and uncertainty. If there are phases in your project where the users can get a preview of the system or process being introduced, take advantage of this.

In one project we asked users to sit down with testers so users can see the system before the big roll out. We did get some great suggestions which we introduced in the system during the same roll-off. Some of the changes suggested required more work and was therefore added to the work order for the next release. The users were exposed to the new system.

Involve Your Stakeholders and Users

Change will fail if the project does not have stakeholder and user support. Despite the different cycles of reaction, it’s important to make sure that the stakeholders are consistently supporting the vision of the project and that users are going to be happy with the end product.

The optimal way to do this is to involve them from the start and throughout the project. Use Discovery stages at the onset of projects to find out their pain points and make sure to address them in the project. It’s important to look at the business wants from the stakeholders and the technical wants from the end users and take both into consideration. Interviews and shadowing are good techniques to uncover and address all the pain points. In one project we created a “project champion” team. This is a group of individuals who are really passionate about the change that is being implemented. They had members from the leadership level and user level. This was really important in gaining support of the other people in the firm.

Whether it’s interviewing, shadowing and/or a project champion team, getting people involved early and often prevents surprises and missed expectations later in the project. More importantly, listening to and involving stakeholders and users gives them ownership and "skin in the game."

Change will never be easy, especially if it is not managed properly. Change is needed to move the company or organization forward. It is inevitable. With insufficient attention to change management, the organization reverts to its prior methods. This is why change management should be an integral part of the project plan. By communicating and involving stakeholders early and often, shock and frustration among the team is minimized and ultimately create an aligned team accepting – and even advocating – the new change.

This blog is part of the CTRM Project Management Done Right series. Check out our other blogs in the series.

At Veritas Total Solutions, we are experts in CTRM Systems and believe our strong project and change management skills make us uniquely positioned to help you reach business value. If you are interested in learning more about our specific capabilities, contact us to learn more or subscribe to our blog to stay connected.

August Al-Uqdah, Partner and Co-Founder of Veritas, has a proven track record leading global teams through the implementation of complex and large-scale solutions in the energy industry. He has extensive experience within upstream, downstream and energy trading organizations.