What Do Negative Oil Prices Mean?

In the midst of all the personal, health, economic, and industry upheaval that we’re experiencing, we never expected to hear this: oil prices have increased over $40/barrel today to return to positive territory, and are hovering around $5/barrel.  That’s the news on the morning of April 21, 2020, as I write this.

Last week negative oil prices were just theory.  Power prices have turned negative in California on several occasions, and are routine in Germany, but these are the exceptions that make the rule.  It could certainly not happen to anything as tangible as crude oil, conventional wisdom thought.  Crude oil prices could not be negative because they represent inherit value.  That was last week.

California has over 27,000 megawatts of solar power generation, nearly 20% of their total electricity capacity.  On clear days in the early to mid-afternoon, solar cells achieve full output, but this doesn’t coincide with the state’s peak demand for power.  Maximum load usually occurs in the mid to late morning and again in the early evening, when residents return from work and fire up their air conditioners and blenders.  The net effect of new wind and solar power generation was famously illustrated in the “duck curve” which shows how difficult California electric utility operations has become.  In the early afternoon traditional generation must be reduced to accommodate output from solar cells, then increased sharply in the 5-7 PM period.  Electricity has very little value in the early afternoon in California, and sometimes its marginal price turns negative. 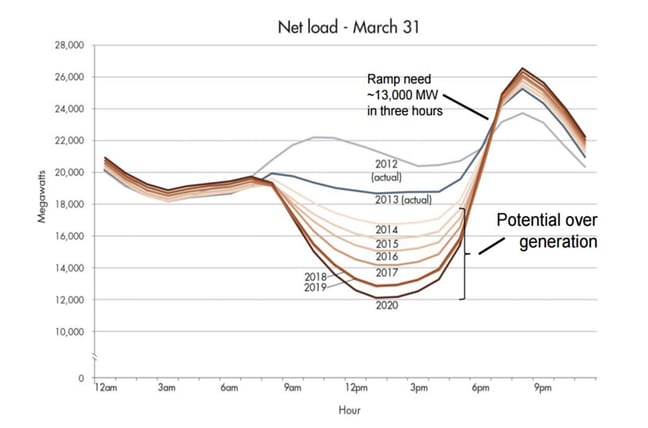 Germany routinely deals with negative prices for the same reasons – the net impact of solar and wind power makes it necessary to pay customers to take power in the afternoon.  The following chart shows recent prices between 3-4 PM. 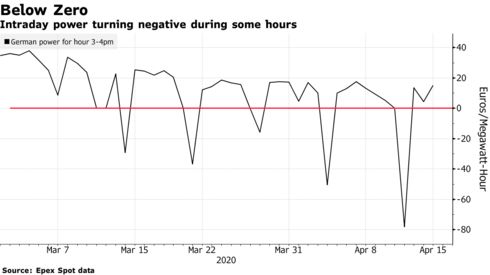 But electricity is very difficult to store.  Why has this happened to a more fungible commodity like crude oil, which is readily stored?

Oil can be stored in above ground tanks or underground caverns.  The amount which is stored is driven by changes in supply and demand, the need for operational flexibility, and financial signals in the marketplace.  Recently the global pandemic has caused demand to fall more rapidly than supply could be curbed.  With no place to market the oil, surplus supplies find their way to storage.

Market prices are providing further incentive to store oil.  When future prices are much higher than current prices (referred to as “contango” price relationships), oil companies and traders are incented to store oil and sell at a later date, rather than sell immediately in the spot market.  The red line in the following chart indicates the price discount between the first and second WTI futures contract (associated with the next two delivery months), and the black line shows how oil storage increased as the discount deepened to $8/barrel. 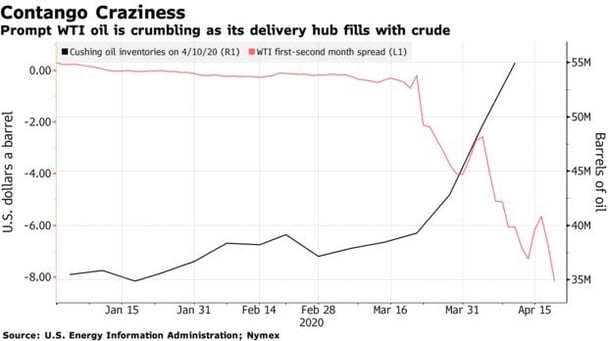 It got worse.  At close of trading on April 20, the May WTI contract was minus $37.63/barrel, which was $57/barrel less than June!   If you owned crude storage yesterday, you could have profited $57/barrel by purchasing May futures, selling June futures, and storing the crude for one month.

Actively traded financial markets like WTI futures represent an order of magnitude more volume than the actual physical markets that underly them.  This is a common feature of many deep financial markets.  However, the WTI financial markets are connected to physical markets during the expiration of futures contracts, because futures require delivery of physical crude oil if held to their expiration date.  As Bloomberg.com published in a recent market analysis piece,  “The contract expiration is when white-collar financial derivatives trading intersects with the blue-collar world of pipelines and storage tanks.”  The WTI futures contract requires delivery at Cushing, Oklahoma.  WTI storage has increased recently from 35 to 55 million barrels, and on this same trend would fill storage capacity within about four weeks.  In effect, we’re running out of WTI oil storage.  This lack of additional storage at Cushing created the price squeeze that we observed on April 20 and 21.

In contrast, Brent crude is primarily transported by waterborne cargoes and is less physically constrained.  The nearest Brent futures contract is for June delivery, which fell 8.9% on April 20 to $25.57/barrel.  The June WTI contract fell 18% to $20.43/barrel, which is $5.14/barrel below Brent.  This $5.14 spread between the two crudes is within a normal range.  June WTI is not subject (yet) to the same price squeeze, but unless supply is sharply curtailed in the next several weeks we may repeat these events when the June WTI contract expires on May 18.

What are the Implications?

Most significantly, the imbalance between supply and demand which caused the price disruption needs to be corrected.  Domestic supply will decrease alongside cuts agreed by OPEC members over the next several months, to catch up with the recent decreases in global demand.  Some firms will be unable to weather the price drop, and the U.S. upstream industry may be dramatically changed. A complicating factor for shale producers is that shutting in production can cause permanent damage to wells and reservoirs, which is very different than conventional production.  This causes a bit of a “Catch 22” situation for this important part of the domestic upstream industry: either produce below costs, or risk damaging the long term economic value of the field.

Some trading organizations will be devasted by recent crude swings, while others will benefit.  Many models used by trading and risk management organizations have been broken.  Like Y2K computer systems that couldn’t accommodate four-digit years, many of these models couldn’t contemplate negative WTI prices and $60 Brent-WTI spreads.  New models and risk management frameworks will be needed.

The WTI futures contract will be further tarnished.  The constraints surrounding Cushing transportation and storage have been recognized for some time, but no one expected what we have seen this week.  WTI will no longer be viewed as a safe global price benchmark.

On a more positive note I once heard Ken Medlock, who heads Rice University’s Center for Energy Studies, observe at a conference that “the best cure for low prices is low prices.”  Negative WTI prices are a strong signal to OPEC and other producing countries of the importance of oil production cuts.  Domestic U.S. production will also be reduced, and a balance between supply and demand will be reestablished.  Not all energy firms will survive this process, but our industry has proven very resilient in the past and is likely to return to strength and growth in the near future.

In the “more good news” category, gasolines prices won’t be going up anytime soon.  Average prices have fallen below $2/gallon in the U.S.  They can’t go much lower unless we have negative taxes on fuels, which are the only things even less likely than negative crude prices.

At Veritas Total Solutions, our team of experts is versed in trading & risk advisory capabilities. We offer advisory services in commercial strategy, organizational structure and capabilities, and technology solutions. If you are interested in learning more about our capabilities, contact us to learn more or subscribe to our blog to stay connected!