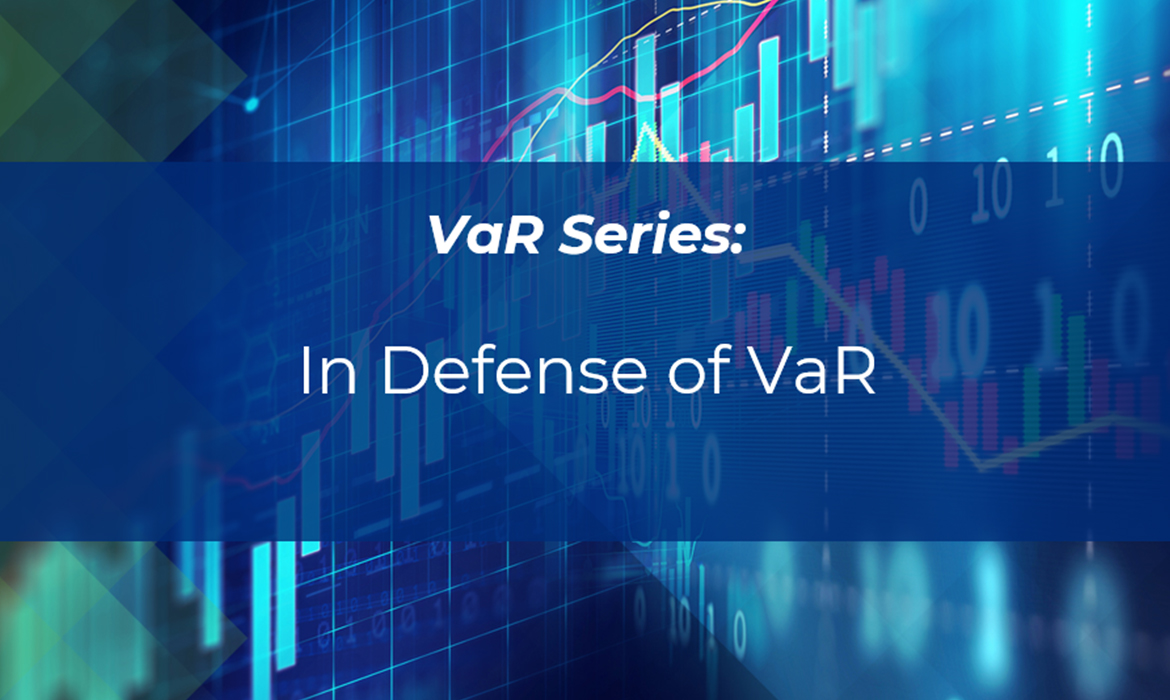 In Defense of VaR

Value at Risk (VaR) has been in the spotlight recently, following several dramatic market drops. The VaR methodology is regularly criticized during periods when market volatility increases sharply. It’s easy to find quotes by portfolio managers and risk professionals that claim their risk systems are misfunctioning and place the blame at the foot of mathematical models. The journalism is sometimes overly simplified, but experienced risk professionals are not surprised by the difference between modeled and actual results.

However, we believe that it’s important to debate VaR’s practice and usefulness, so we’ll offer our perspective. Several important points are underscored by recent events:

In our view, this is not a question of models being right or wrong, but it’s very important to understand their tendencies in different market conditions. Let’s take a look at recent activity in several markets to explore these points further.

This blog presumes knowledge of historical and implied volatility. For additional background, you can refer to our blog, What are Historical and Implied Price Volatilities Telling Us?.

We’ll use the U.S. equity market for our first example. The following charts show recent prices for SPY (a popular ETF mirroring the S&P 500), as well as SPY historical and implied volatility (from iVolatility.com).

Early in the COVID-19 pandemic, the S&P 500 fell 34% in just over one month (Chart 1, Period A), then rapidly recovered 2/3 of its loss (Period B). Continued market strength pushed the market above pre-pandemic levels, until a recent 8% pullback (Period C). 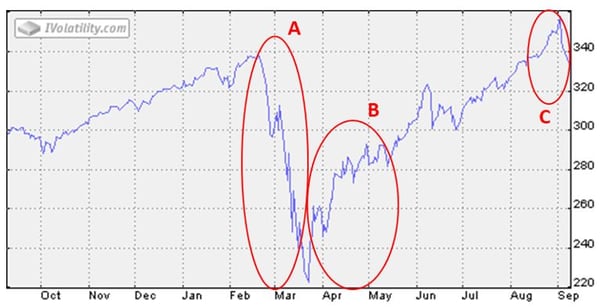 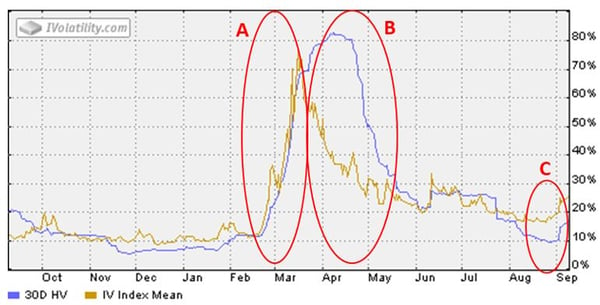 Most VaR models are based on a recent historical sample period, e.g. daily price returns over the past 3 months. When a string of sudden bearish or bullish moves occur in the market, these models trail actual impacts. As illustrated above, an additional VaR calculation based on implied volatilities may provide a significantly different perspective which a risk manager should consider.

In addition to the above qualitative observations, we can use a Back Test report to determine how many times actual market returns would have breached VaR limits calculated with historical versus implied volatilities. We will continue to use SPY as the basis of the example as we did above. Chart 3 compares daily returns and risk during mid-February through the end of April 2020 for a long position in SPY. 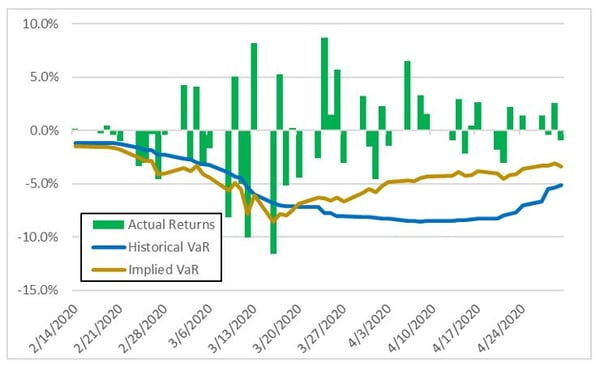 It can be argued that VaR calculated from implied volatilities was more realistic in both falling and recovering markets, although it’s interesting to compare both VaR methods to actual returns.

There’s a common misperception that Back Test reports are only useful to validate models during system projects, such as the implementation of a new risk solution. We believe that they are also helpful in daily operations, to promote comparison and understanding of the differences between market action and risk estimates.  Back Test reports should be regularly monitored to track whether the number of limit breaches are reasonable, in order to determine if the VaR model accurately reflects the market and price distributions. In the examples noted above, neither the historical nor implied VaR models are “broken,” they are just providing different information. And sometimes you need to pay attention to what implied volatility is telling you.

Next, we’ll look at recent 2020 price action for USO, an ETF based on nearby WTI futures. Charts 4 and 5 provide price and volatility charts since oil prices collapsed in March-April and partially recovered. We’ll compare historical and implied volatility for four different periods of time: 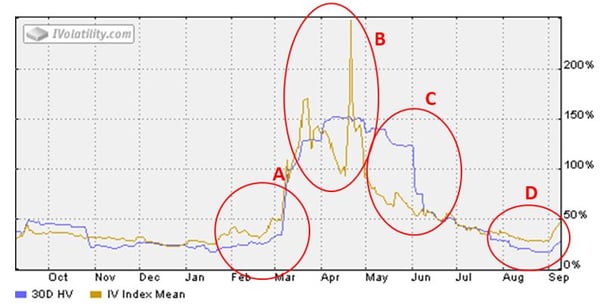 “Avoid Explosions” by Considering Both Models

Healthy risk management organizations routinely debate the meaning of different models as described in these examples. True, with 20-20 hindsight it’s easy to pick periods like these, during which one methodology outperforms the other. However, no VaR models have perfect predictive capabilities. The question is, how do we make the best information available to manage our risks? Historical volatility (and VaR calculated from the same) is by definition a trailing indicator. In contrast, implied volatilities provide insight into the expectations of option traders, who are imperfect but at least attempt to predict future price action. Our main point is that these models provide different information. Your choice of whether to use one or both of these models or a more sophisticated predictive risk algorithm should be right-sized for the needs of your business.

It is non-trivial to implement VaR (or credit risk) models that are based on implied market statistics.  In many financial and commodity markets, implied volatilities and correlations are not continuously observed and it is difficult to obtain complete data sets.  It is often necessary to employ more complex processes to fill data or otherwise develop reasonable risk statistics.  These tend to require judgment and be more subjective, whereas risk managers prefer objective measures which cannot be manipulated.  There is not a perfect solution to this balancing act, and compromises may be required.  For this reason some organizations rely on historically based models as a “base case,” and use implied models as scenarios that provide additional information.

Standard VaR implementations are only reasonably accurate for +/- 1 standard deviation price movements, but they are attempting to describe risk beyond 1.6 or more standard deviations.  They also assume symmetrical probability of up/down market movements.  Both of these shortcomings can be addressed by scenarios, which should be used to augment the results of VaR in a comprehensive risk management process. Scenarios can include larger price changes (e.g. +/- $10-20/barrel) and directional shocks (e.g. +$5,000/MWH).

One of my undergraduate chemical engineering professors was fond of saying, “Your main job is to avoid explosions.” Similarly, one of the most important goals of risk management is to avoid surprises. The best way to manage the expectations of senior executive teams and other stakeholders is to promote a clear understanding of what risk models do and do not predict. Transparency and deep understanding are in everyone’s interests. Ideally, this will reduce the chance that your VaR model is ever blamed for poor financial results.

To read more about VaR, check out the other blogs in the VaR series:

At Veritas Total Solutions, our team of experts is versed in VaR and other trading & risk advisory capabilities. We offer advisory services in commercial strategy, organizational structure and capabilities, and technology solutions. If you are interested in learning more about our capabilities, contact us to learn more or subscribe to our blog to stay connected!